Article courtesy of The Boilermaker Reporter 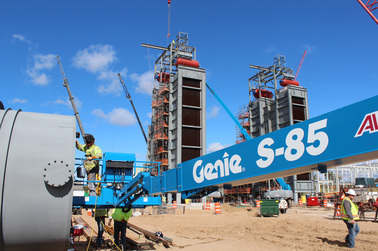 Local 169 Journeyman Brandon Bittrick, works on the bottom section of an exhaust stack at the Holland Energy Park..
EIGHTEEN MEMBERS OF Local 169 (Detroit) are among the building trade workers constructing a $240 million combined cycle plant in Holland, Mich., a community of 28,000 in the state’s western Lower Peninsula. The new plant, situated on about 26 acres, will replace and double the output of the aging James DeYoung coal-fired facility, which was completed in 1939.

Several aspects of the project make it rather unusual. First, it will operate as a combined heat and power (CHP) plant, generating 125 megawatts of electricity in summer and 145 megawatts in winter, when surplus heat from the circulating water system will be diverted to the city’s existing snow melt system under downtown city sidewalks.

Since the new Holland Energy Park will be located near an area of neighborhoods and businesses, the plant will also have an aesthetic design, including a glass, concrete and insulated metal panel skin with sound retention qualities.

Barton Malow is the prime contractor for the project. Work began in earnest on the plant in March, and completion is set for February 2017. The facility will include two gas-fired 50-megawatt combustion turbines and recovery steam generators, and one 45-megawatt heat recovery steam turbine. 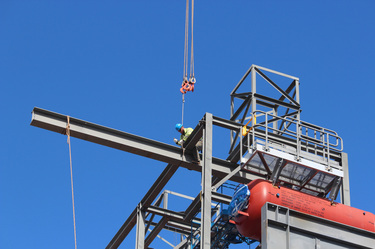 Local 169 Journeyman Tyler Way sets a monorail atop a piperack at the Holland Energy Park.
Natural gas will be brought into the Holland site via a seven-mile-long pipe. Compared to the DeYoung plan it is replacing, the new combined cycle gas plant is projected to reduce carbon dioxide emissions by 50 percent, nitrous oxide emissions by 66 percent and sulfur dioxide by 99 percent.

L-169 Business Agent Jim Kaffenberger said members are working 4 shifts of 10 hours and are several weeks ahead of schedule. “We should get about 23,000 man-hours on the project,” he said.

At press time, the trades had worked around 180,000 man-hours without a recordable injury.